Balancing economic growth between regions can be tricky business. Local trajectories have a great deal to do with momentum and thus can be difficult to alter. Inter-regional migration is a dynamic that tends to be cumulative. Places with more opportunity attract more people which in turn fuels more growth. The flipside is that when struggling places lose people their problems increase further. The movement of people, and the highly skilled in particular, is a significant accelerant to inequality between cities.

There is a clear east-west pattern of migration in Canada. Figure 1 shows that Alberta and British Columbia are the biggest gainers of both foreign and domestic migrants, while Ontario and Quebec have actually lost people to other parts of the country in recent years. There are also clear trends across the urban hierarchy (see Figure 2). The biggest cities attract the most international migrants but at the same time have net negative domestic migration. These patterns correlate with more general patterns of uneven growth across the Canadian urban system. The overall picture includes a shift from east to west, growth and increasing cultural diversity in the biggest cities, plus net domestic movement out of large urban centres. 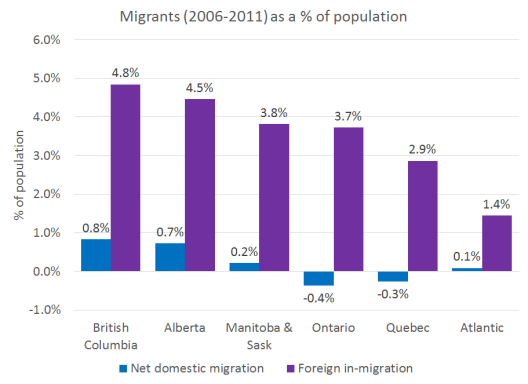 An important caveat to the last point concerning net migration out of the largest cities is that the opposite is true for young people in their 20s. Figure 3 breaks down domestic migration for the four largest city-regions by age group. Individuals between 20-29 years of age exhibit significant net positive migration to the largest cities. For all other age groups net migration from these four city-regions is negative. It is important to remember that these are the Census Metropolitan Areas and not the municipalities and so we are not simply observing core to suburban movement but people leaving the regions altogether. Part of the trend of young people moving to cities is due to the presence of large post secondary education institutions, part of it is the perception of greater career opportunities as well as greater social (and potential marriage) opportunity. The other perspective is that small towns and rural areas have serious problems retaining young people for the opposite reasons. This can be a serious socio-economic issue for such places especially if they have a hard time attracting back people in mid-career who left for the bright lights of the big city earlier in life.

The life stage of people plays an important role in where they choose to be. Once people enter adulthood in their late teens and early 20s choices are often driven by a sense of opportunity and finding oneself (and finding others). When people start families the needs of their children are often weighed against the needs of their own careers and other desires. Retirement is another life event that can often lead to migration decisions. Traditionally, there is a pattern of movement to smaller and more rural areas, but there may also be a developing trend towards downsizing and city living. It is the first set of transitions, entering post-secondary education and subsequently the labour market, that have the largest impact on local economies. The young and talented drive growth and have the potential to do so for longer. Thus, the presence of higher educational institutions are important assets for local communities, but they must also provide employment opportunities after graduation in order to retain young people. Figures 4 & 5 show the percentage of the adult population with post-secondary qualifications and where they received their highest degree by province and by size of place. A familiar pattern is evident whereby the western provinces have been able to attract more highly educated people from elsewhere as have the largest cities. 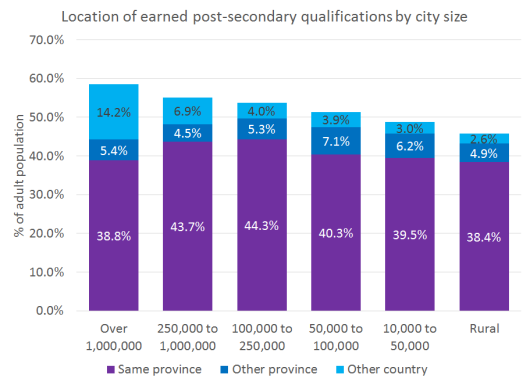 The overall migration patterns between Canadian cities is highly congruent with patterns of economic and social opportunity. The western provinces and largest cities are the winners in these stories, while the east and smaller places are the losers. As migration is largely a zero-sum gain (there is also some benefit to churn), it is a major factor fueling increasing inequality between city-regions in Canada. Such patterns have a tendency to be self-reinforcing and thus are difficult to arrest. These patterns also correlate with inequality in house prices, which act to somewhat mitigate the flows of people to ‘have’ from ‘have-not’ places. This will be examined more closely in the next post in this series.