Education and inequality between Canadian cities

The widely accepted growth model for developed countries in the 21st century is about achieving advantage based on creativity, innovation and knowledge. In a global economic system cost cannot be the main source of competitive advantage as developing countries will always be able to offer cheaper labour. ‘Winning’ on these terms is not desirable in any case. Instead, economic development strategies focus on finding ways to produce higher value added goods and services. Such activities tend to be highly spatially concentrated in certain places which are often the largest cities. Canada in some ways in an exception to these patterns, but this is mostly an illusion, and a temporary one at that.

As the previous post outlined, income inequality between Canadian cities follows a broadly east-west divide mainly due to resource rich cities Alberta and neighbouring provinces. What sets Canada apart from most other developed countries is that it is still quite possible to have a high income without a corresponding high level of education. Jobs in oil, gas, and mining (and some related construction) frequently pay six figure salaries and do not require a university degree. Thus, the pattern of income inequality between cities is not strongly correlated with patterns of education inequality (see Figure 1). This is not to say however, that the pattern of knowledge-production differs significantly from other countries as there is a correlation between city size and the ‘knowledge-intensity’ of economic activities (see Figure 2). 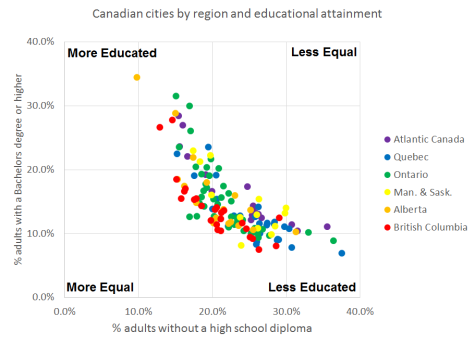 The demand for highly educated workers in Canada is highest is the largest cities (see Figure 3). Across the urban hierarchy (including rural areas) there seems to a be a floor of around 10% of the population with a university degree (see Figures 2 & 4). Main drivers of this trend are public sector (and related) professional occupations such as teachers, nurses, and doctors that are directly related to local population size. Much of the difference in demand for highly educated workers is due to categories of predominantly private sector professionals that are only found in significant numbers in larger cities. The reasons for this are complex. The social nature of learning gives certain advantages of agglomeration to the largest places. Key pieces of local infrastructure such as universities, research facilities, cultural institutions also tend to be concentrated in big cities. Major airports provide global connectivity and are also key sources of competitiveness. 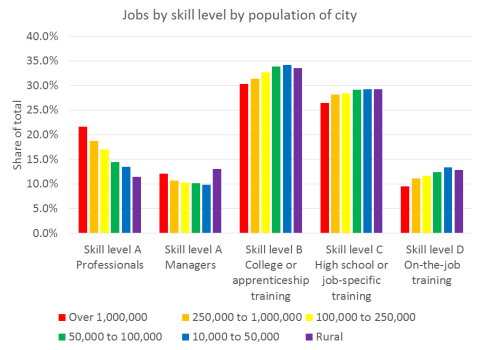 There are two somewhat contradictory implications to these trends. One is that on a national level our economic debates focus more on oil pipelines in rural areas than people pipelines in cities. We should be well familiar with non-renewable resource booms to know that it will end in tears. For Canada to be globally competitive, now and in the future, it must invest more in its major cities. This brings us to the second implication. Even if our top cities become a national priority this would further exacerbate inequality across the urban hierarchy. A conundrum shared by most developed countries. Overall growth is heavily dependent on the growth of the largest cities, but this fuels inequality with smaller cities and rural areas. Such divides are not only economic in nature, but take on broadly culturally aspects, which are increasingly reflected in electoral politics. Perhaps the biggest worry for Canada is that neither will be recognized or addressed and we will end up with weakened central cities as well as persistent regional inequality.

The next post in this series will further explore how these patterns are evolving over time particularly in relation to demographic shifts and migration.